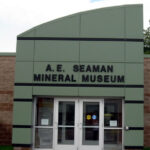 Recognized as the primary mineral museum in the state of Michigan, the A.E. Seamen Mineral Museum has been one of the Keweenaw Historical Park’s Heritage Sites since its establishment in 1992.  The museum is located on the campus of Michigan Technological University in Houghton, Michigan.  The museum is named for professor Arthur Edmund Seaman, who worked at Michigan Tech in the late 1800’s and early 1900’s, and was the museum’s curator from 1928–1937.  The museum currently houses over 25,000 specimens of minerals that are significant to the Upper Peninsula of Michigan.

The mineral collection was established in the late 1800’s and by 1890 had grown into an astonishing 27,000 specimen collection.  Most of these specimens are native to Michigan, and more specifically to the Lake Superior area.  The geological-mineralogical museum became a reality in 1902.  In 1907, the legislature provided for a fire-proof building to house the library, administrative offices, and “the geological and mineralogical museum collection.”  This building was constructed in 1908. 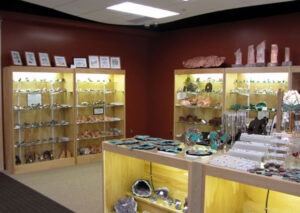 Professor A.E. Seaman served as curator of the collection from 1928 until his death in 1937.  The museum door was adorned with a bronze plaque honoring the memory of this fine man who was instrumental in organizing the building of this museum and devoted much of his life to developing a world renowned mineral collection.

In 1931, the museum was moved to Hotchkiss Hall and was renamed the A. E. Seaman Mineral Museum in 1932.  Over the years the museum has been relocated to various buildings.  It currently is located in Thomas D Shaffner Hall, across from the Advanced Technology Development Complex.  The museum was designated the “official Mineralogical Museum of Michigan” in 1990 by the Michigan Legislature.

Learn more about the history of the A. E. Seaman Mineral Museum, how you can support it, and view pictures of the collection at the college’s website – www.museum.mtu.edu