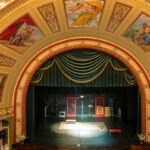 The historic Calumet Theatre opened on March 20, 1900 in what was then a booming mining area.  The copper mining in the Keweenaw Peninsula was reaching its peak and the village of Calumet had a population of 4,000 residents with 30,000 within walking distance of the theatre.  For decades the Calumet Theatre was one of the premier locations for stage performers and touring Broadway shows.

However with the invention of motion pictures in the 1920’s and the decline of the mining trade in the area, the theatre began to lose some of its grandeur.  From the depression through the late 1950’s, it operated solely as a movie theatre by numerous independent groups.  In 1971 the Calumet Theatre was listed as a National Historic Landmark.  However, it wasn’t until 1972, when the Calumet Theatre was brought under the control of Michigan State University, that it began to be brought to its former glory. 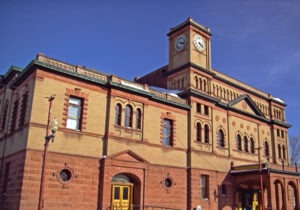 In 1975, on the centennial of the village of Calumet, the auditorium was renovated.  In 1983 the Calumet Theatre Company was incorporated as an independent, non-profit cultural organization to program events and encourage continuing restoration. Then in 1988-89 the exterior was restored.   It was made a Heritage Site of the Keweenaw National Historical Park in 1993 and is the only site that still serves its original function.

Funding for the Calumet Theatre comes from ticket sales, user fees, the State of Michigan, membership dues, and other in-house fund-raising activities.

Learn more about the Calumet Theatre and see their upcoming events at their website: www.calumettheatre.com