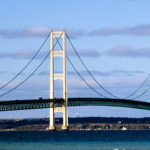 As the link between lower and upper Michigan, the Mackinac Bridge is traveled by thousands of people each day.  It is also a highlight of not only the Upper Peninsula but the whole country.  If you do not drive across it on your way to the UP, make sure to visit and get a photo of this metal giant.

This bridge is currently the fifth longest suspension bridge in the world and spans a total length of 26,372 feet, with 8,614 feet of that length held up by suspension.  The Mackinac Bridge has been standing for over 50 years and ever since its completion has been a major tourist attraction.  The bridge is also an architectural marvel and has a rich, unique history.

As far back as 1888 there were talks of connecting Michigan’s two peninsulas.  On July 1, 1988 the board of directors of the Grand Hotel at Mackinac Island met to discuss this difficult task.  They reasoned that a bridge to span the large distance was needed.  Decades would pass before any work on this plan would take place.  Then in 1934 the Mackinac Bridge Authority was put into place and given the authority to investigate accomplishing the building of the bridge. 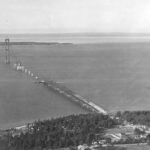 More setbacks were on the horizon however.  The Authority was continually turned down for grants and federal funding for this huge project.  Then in 1947, the Authority was abolished by legislature.  Did this mark the end of any hope for the Mackinac Bridge being built?  Not at all!  Just a few years later in 1950, the Authority was again given the task of researching the requirements for building the bridge.  In the early 1950’s bonds were established to raise the approximate $86,000,000 that the project was estimated to cost.  Then on May 7 & 8, 1954, at St. Ignace and Mackinaw City ceremonies marked the beginning of the building of the Mackinac Bridge.  The project took over three years to completed, but progress remained steady.  Finally on November 1, 1957, on schedule, the Mackinac Bridge was completed.

The bridge today is 54 feet wide and about 200 feet above the water at mid-span.  Since part is a suspension bridge, it is designed to sway with the powerful gusts that come down the straits.  In heavy winds this can cause the bridge to sway up to 35 feet east or west.  The entire steel structure can support a total weight of 38,486 tons.

The bridge receives funding from tolls that are collected to gain crossing.  The current fare is $4.00 per car or $2.00 per axle.

For more information regarding history, fares, and events of the Mackinac Bridge visit http://www.mackinacbridge.org/