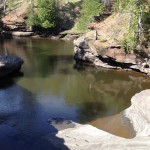 Salmon fishing was in high gear as coho, pink and Chinook salmon were found concentrating in the mouth of Nunns Creek. Fishing was not as heavy on the Carp River upstream from the mouth. Anglers wearing waders were more successful because they could access a wider area to find active fish.

Fishing was slow as the wind was keeping anglers off the water.

Fishing activity increased, while lake trout were the most common species caught. A few anglers also reported catching salmon. Most lake trout were caught on spoons by anglers fishing from the white rocks in 60 to 90 feet of water. Lake trout were caught near Granite Island in water 150 feet deep or deeper using spoons and flickers.  Anglers also reported salmon catches while trolling near the mouth of the Chocolay River to Shot Point. Try running high lines using rainbow/gold spoons for salmon.  Anglers fishing the Chocolay River reported catching fish while fishing with spinners or floating spawn.

Fishing effort was low due to the weather. Several anglers fishing the pier reported catching a few small splake.

Very few anglers have been out due to conditions. One boat trolling within the harbor marked fish; however, only one coho was caught.

Fishing for lake trout was good when the weather allowed anglers to get out. Anglers also reported catching some salmon, but the bite was slow. Anglers were primarily using spoons and flasher flies. Coho and steelhead were caught in nearshore waters while fishing near river mouths. Try trolling in the early morning while salmon and trout are beginning to stage for their spawning migrations.

Anglers fishing just outside the mouth of the canal were not having much luck. However, reports of lake trout caught while trolling were increasing. Recent weather conditions have made fishing tough and kept activities low. Try fishing the early bite when salmon and trout begin to stage in the river mouths.

Fishing activity remained low over the past week. Au Train Island was the only place where anglers reported catching lake trout. Anglers reported catches of lake trout in the flats around the island as well as in deep water. Anglers fishing the flats were doing best by trolling spoons or flickers in 40 to 60 feet of water. Anglers fishing 80 to 150 feet of water were picking up fish while trolling spoons or by jigging cut bait.

The fishing in Lake George has been productive, with northern pike, smallmouth bass and yellow perch being caught. An occasional walleye has been part of the catch as well, which was an increase from previous weeks. The weather has been challenging for anglers and has influenced what the fish are interested in from day to day.

Fishing in Lake Nicolet improved recently, primarily due to changes in weather and water temperatures. Anglers have been trolling for walleye, casting for northern pike and bass, jigging for yellow perch, and using a variety of gear and techniques for salmon. Anglers who have been able to find schooling baitfish were able to catch more fish. More salmon have been seen in the river, and numbers are expected to increase into the fall.

The recent weather has limited angling activities where a few yellow perch were being reported. Crawlers and minnows were the bait of choice while fishing off the bottom of the river. Anglers also reported catches of northern pike, walleye and smallmouth bass near the locks and in the Tahquamenon River.

Surface water temperatures are very warm for Lake Superior with the mid-to-upper 60s offshore and above 70 degrees near shore. A few anglers out trying for lake trout did poorly, with only one or two fish taken. Water levels were high at the mouth of the Dead River.

Walleye catches were best along the “Black Bottom” when trolling crawlers or stick baits along the east bank in 20 to 30 feet; near Breezy Point right along the break; and a little further south near Round Island in 16 to 24 feet. Perch fishing was spotty with only a few caught near the green buoy by the Day’s River and along the First or Second Reefs with crawlers or minnows in 14 to 35 feet. There was good bass action near the mouth of the Whitefish River when casting plastics.

Weather conditions have limited anglers. Most salmon anglers are still fishing the buoy area and towards Barques Point at 60 to 90 feet down in 100 to 120 feet. Most boated two to three fish.

There was still some walleye being caught up near the High Dam spill-over when using stick baits, jigs, and crawlers. The breakwall was good for walleye, but many were undersize.

There were very few anglers. Fishing was slower with only a couple lake trout taken. Fishing off the Anna River dock has been poor this summer with very few fish being caught.

Anglers had good catches of northern pike along the north shore of Raber Bay when trolling and casting crankbaits or a chrome spoon with a red eye just off the weed beds in the early morning. For perch, anglers were fishing between Big Lime and Little Lime Island in 6 to 8 feet with worms and shiner minnows. Also try a small white rubber body spinner bait near the weeds. There were no reports of lake herring at Lime Island.

Effort for trout and salmon slowed at the Detour Reef, since most are targeting lake herring. A few caught Atlantic salmon, pink salmon and lake trout two miles south of the Detour Lighthouse.  Lake trout are staging in either direction once you hit the 90-foot flat. East of the lighthouse, head to the first red buoy, which has structure and baitfish for salmon. Stagger your lines from 25 to 40 feet for Atlantics or 52 go 60 feet for Chinook. Fair walleye catches were reported off Sweets Point for those trolling bottom bouncers with shad colored crankbaits in 8 to 12 feet off the points and rocky shelves. Those anchoring and still fishing with a slip bobber and shiners in 8 to 10 feet also caught walleye.

There were good catches of lake herring on the north side of the island. Try red or brown teardrop jigs tipped with a wax worm in 25 feet near Burnt Island, Pigeon Cove, Fair Banks Point and Butterfield Island.

There were no reports of herring at Prentiss Bay or McKay Bay near Cedarville. For smallmouth bass, try the Middle Entrance of the Les Cheneaux Islands or the mouth of Duck Bay when casting spinners or jigging with an orange tube jig in 4 to 6 feet. There were no reports of yellow perch caught throughout Cedarville Bay or the channel that runs parallel to Islington Road. For Hessel, yellow perch could still be found near the finger docks at the marina.

Many are small but anglers have caught bigger fish on worms and small white or chartreuse spinners with a rubber body. Early morning was best. Some nice pike were caught off the Hessel fishing pier when using large minnows or creek chubs 2 cranks off the bottom in 8 feet.